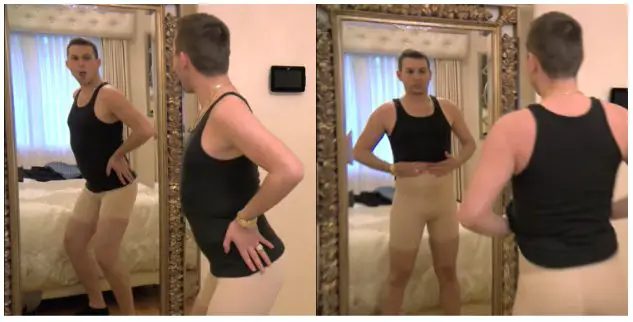 Did you know Matt Fraser has been caught multiple times wearing Spanx, and he’s proud of it?

The Meet the Frasers star, Matt Fraser, tried to wear Spanx when he proposed to Alexa Papigiotis, his beauty queen girlfriend. In that special event, he wanted “cheeks of steel,” and he managed it by wearing Spanx shaping shorts. Her sister, Maria Fraser, even caught him in Spanx and reacted shockingly.

Matt Fraser said; “there’s a lot involved when you’re getting ready to propose to your girlfriend! A lot,” the psychic medium also followed,” what I need to make sure of is that I’m on track.” That said, he meant being good-looking and well-shaped during that special event. Then, to achieve that, he decided to wear a gentleman’s Spanx.

In the clip from Meet the Frasers Season 1, the Cranston, Rhode Island resident tries a new pair of Spanx shaping briefs before proposing to his pageant queen, Alexa Papigiotis.

According to Matt Fraser, “there’s a lot involved when you’re getting ready to propose to your girlfriend! A lot,” the psychic medium also followed,” what I need to make sure of is that I’m on track.” That said, he meant being good-looking and well-shaped during that special event. Then, to achieve that, he decided to wear a gentleman’s Spanx.

Although the Spanx appear too tight, Matt claims they make him look freaking good. Then, he said, “I haven’t had a body like this since high school!”

While Matt is rocking and wiggling the Spanx, saying, “John Travolta style,” his sister Maria Fraser walks in the room without knocking or ringing the doorbell.

With that, she saw Matt in Spanx-shaping shorts and was shocked, saying, “what the f–k is this?” In that situation, Maria is understandably shocked to discover her brother wearing a girdle, but Matt corrects her that it’s not a girdle but a gentleman’s Spanx. Matt Fraser also said, “I don’t care if they call me a f—kin’ fraud, a fake, a con artist, a scam artist, but if they call me fat, I’m going to f—king cry.”

As Maria urges her brother to “put on some pants,” Matt explains that he’s doing it out of love. According to Matt, it’s a big day, and he has gone above and beyond for the proposal, including:

As a result, he wants to appear camera-ready. Matt then tells the Meet the Frasers’ camera, “you know the camera adds ten pounds. I’ve got to ensure that 10 pounds get sucked back in!”

On The Kelly Clarkson Show, she asked Matt Fraser about his Man Spanx clip, “how real is reality TV? Because there are cameras there, so probably that’s not real.” Matt replied, “I’m on season 1, so I didn’t know better than acting myself. I didn’t know how much of it would be on TV. They said to ignore the cameras and go about your daily business. So, I went about my daily business. I was on the bidet. I’m getting into my Man Spanx. I have no idea that it would end up on TV.”

In summary, Matt Fraser, a psychic medium, tells Kelly Clarkson that he had no idea what would or would not end up on TV while filming Season 1 of his reality show “Meet the Frasers” and that he was surprised to find footage of him putting on his “Man Spanx” made the cut.

About Matt Fraser and His TV Show Meet the Frasers

Matt Fraser is the top psychic medium in America and the star of the TV series, Meet the Frasers.

His sold-out live events, television appearances, and spiritual teachings have enabled him to bring healing, hope, and laughter to an international audience of fans and followers. Matt’s uncanny abilities and extreme accuracy have helped him to reach millions of people worldwide, from A-list celebrities and influencers to ordinary people looking to reconnect with loved ones.

Moreover, Matt has attracted the attention of major media outlets across the country, including The New York Times, People, and CBS Radio, as the bestselling author of When Heaven Calls and a psychic phenomenon.